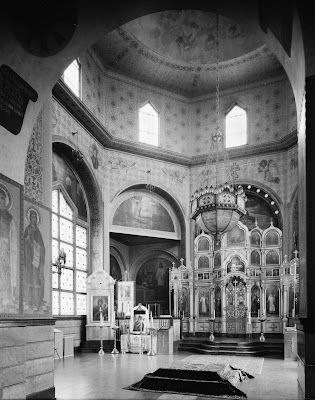 Join City of Chicago cultural historian Tim Samuelson for an exclusive look at an architectural gem, Holy Trinity Orthodox Cathedral, 1903, Louis Sullivan Architect
Enjoy cocktails and hors d'oevres in the parish social hall with a lecture to follow in the sacred space.
Friday, May 14, 2010 at 6:30 p.m.
1121 N. Leavitt Street, Chicago
Complimentary parking available behind church building accessible via Haddon, east of Leavitt.
$50 suggested donation for Holy Trinity’s Building & Restoration Fund
Space is limited! RSVP by May 7th Leo@friendsofholytrinity.com or 773-728-1386
Wikipedia Excerpt Follows: Holy Trinity Orthodox Cathedral is the Cathedral Church of the Orthodox Church in America Diocese of the Midwest. It is one of only two churches designed by Louis Sullivan, one of the seminal architects of the 20th century.
It is listed on the US National Register of Historic Places and is designated a Chicago Landmark. The church was commissioned by the growing Russian congregation of Chicago, Illinois, and stands within the neighborhood known today as Ukrainian Village.
It remains one of only two Orthodox Churches servicing the orthodox community in Ukrainian Village. Construction work, partly financed by Tsar St. Nicholas II of Russia, lasted from 1899 to 1903. The church retains many features of the Russian provincial architecture, including an octagonal dome and a frontal belltower.
It is believed that the emigrants wished the church to be "remindful of the small, intimate, rural buildings they left behind in the Old World". Actually, the church would have passed unnoticed in the Russian countryside, if it were not for Sullivan's hallmark modern sensibility.
The cathedral's interior is based on the St Volodymyr's Cathedral in Kiev. The church was elevated to a cathedral in 1923, and stands today a member of the Orthodox community in Chicago.
Image courtesy HABS; Historic American Building Survey

Posted by Society of Architectural Historians Chicago at 8:53 AM No comments: