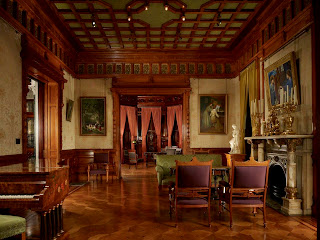 The House Beautiful: Magnificent Interiors of the Gilded Age
Commences This Spring and Celebrates with Complimentary Program Admission in 2010
CHICAGO (Feb. 24, 2010) – This March, The Richard H. Driehaus Museum announces the
launch of the Samuel M. Nickerson Lecture Program, a new annual program of lectures that
promotes the understanding and appreciation of historic architecture and design. The series features an engaging array of public lectures by notable scholars and authors in the field of 19th-century decorative arts and design. To celebrate the occasion, this year’s entire Program, which has been made possible through the support of Harris Bank and Sotheby’s, is open and free to the public.
The Program’s Roots and Purpose
Named for Samuel Mayo Nickerson, the original owner of the historic 1883 residence that
now is home to the Driehaus Museum, the Lecture Program serves to situate the Nickerson House within the context of the social and artistic developments of the period and against the wider background of America’s Gilded Age.

The Gilded Age was a time of unprecedented change and creativity in American culture. As a
new nation emerged from the aftermath of the Civil War, the country entered a period of
unparalleled economic growth, taking its place on the world stage as a leader in industry and
commerce. The new class of wealthy entrepreneurs that arose at this time found the perfect symbol to display their newfound fortunes in the elaborate residences they commissioned from the leading architects and decorators of the day.


The 2010 Samuel M. Nickerson Lecture Program considers the philosophies in art, architecture and design that governed the creation of these remarkable homes. “The Samuel M. Nickerson Lecture Program is an integral part of the Driehaus Museum’s mission to promote the understanding and appreciation of historic architecture and design; we are delighted to announce the Program’s launch and are grateful to both Harris Bank and Sotheby’s for their generous support,” says David Bagnall, director of the Driehaus Museum.

This Year’s Program, Series and Schedule
The 2010 Samuel M. Nickerson Lecture Program is titled The House Beautiful: Magnificent
Interiors of the Gilded Age and explores the theme of invention and innovation in the design of late 19th-century American interiors. The series commences Thursday, March 25th, welcoming Nina Gray, independent curator and consulting curator for the Park Avenue Armory in New York City. Gray will discuss the development of the interior decorator profession during the Gilded Age. A light reception will follow the lecture. The roster of this year’s series schedule consists of:

Thursday March 25th, 6:00 pm
Living in Style: The Development of the Interior Decorator in the Gilded Age
Nina Gray, Independent Curator and Consulting Curator for the Park Avenue Armory, New York During the Gilded Age, the role of the interior decorator evolved aesthetically and commercially in the creation of stylish interiors. The high style interiors of the 1870s were mainly created by cabinetmakers. During the 1880s, artists took up interior design and added a new level of sophistication. Many of the architects who were commissioned to design the houses of the very wealthy during the 1890s designed the interiors as well. By the turn of the century the professional interior decorator emerged to assemble interior schemes advocating good taste and comfort. Nina Gray has served as an independent curator and architectural historian since 1991. Among the institutions she has worked with are the Park Avenue Armory, Frick Collection, the Brooklyn Museum, the Landmark Preservation Fund, and the New-York Historical Society. Prior to her independent work, she held positions at such institutions as the Metropolitan Museum of Art and Sotheby's.


Thursday April 29th 6:00pm
Japanism and the Arts and Crafts Movement
Ellen E. Roberts, Assistant Curator of American Art, Art Institute of Chicago, Chicago, Illinois
Ellen E. Roberts, Assistant Curator of American Art at the Art Institute of Chicago, explores the
relationship between the Arts and Crafts movement and Japanism, or the craze for all things
Japanese, in Britain and America. Arts and Crafts practitioners admired Japanese works because they were thought to derive from a culture that was free from the depravities of modern industrialism. This romanticized view of Japan made its art seem the perfect model for Arts and Crafts creations. At the same time, as artisans studied more Japanese objects, they began to emulate these works’ underlying design strategies. Japanesque characteristics such as simplicity, geometry, and modularity helped to lead British and American designers toward modernism.


Thursday May 27th 6:00pm
Lockwood de Forest and the East Indian Craft Revival
Roberta A. Mayer, Associate Professor, Art History, Bucks County Community College, Newtown, Pennsylvania
Roberta A. Mayer, de Forest scholar and author of the recently published, Lockwood de Forest:
Furnishing the Gilded Age with a Passion for India (University of Delaware Press, 2009), will explore the designer's career within the context of the late 19th-century East Indian Craft Revival. Lockwood de Forest (1850-1932) had recently established a business partnership with Louis Comfort Tiffany (1848-1933) when he began his first journey to India in 1880. His aim was to acquire exotic goods for Tiffany & de Forest Decorators. Along the way, he encountered many individuals involved in the late-nineteenth century East Indian Craft Revival, a movement that found support amongst the British proponents of Arts and Crafts and the British Colonial government in India. He soon developed his own strong appreciation for India’s living craft traditions. When de Forest returned from his travels in 1882, it became clear that he and Tiffany would not continue their joint venture (although they shared many clients in the years thereafter). From 1882 until 1908, de Forest ran his own decorating establishment in New York City, first at 9 East Seventeenth Street and later from his house at 7 East Tenth Street. He focused attention on marketing the Indian style, but also promoting the work of the mistri of Ahmedabad, India, a sub-caste of highly skilled wood carvers. De Forest’s lavish Indian rooms were in demand by some of the most visible figures of the Gilded Age and graced fine houses across the county.

Thursday, September 23rd, 6:00pm
Olana: Frederic Church's "Aesthetic Frolic"
Evelyn D. Trebilcock, Curator, The Olana Partnership, Hudson, New York
The most celebrated artist of his day, Frederic Church (1826-1900) is best know for his large scale masterpieces, Niagara, 1857 and Heart of the Andes, 1859. Olana, his home on the Hudson, is alsoone of his masterpieces. Church worked for 40 years on his 250-acre farm and estate—crowning it with a Persian inspired castle. The house—a work of art ornamented with tiles and spectacular stencils—served as a show-place for his myriad collections, including Middle Eastern metal work, Chinese ceramics, old master paintings, oriental rugs, and pre-Columbian artifacts. Church carefully arranged his treasures to create what the New York World described in 1879 as "an aesthetic frolic" - and these interiors remain today as outstanding examples of the aesthetic movement in America.

Thursday October 28th 6:00pm
Cranes, Dragons, & Geishas: A Brass Menagerie, Metalwork of the Aesthetic Movement
Anna Tobin D’Ambrosio, Assistant Director & Curator of Decorative Arts at the Munson-
Williams-Proctor Institute, Utica, New York Anna D’Ambrosio, a leading historian of American Aesthetic Movement metalwork and Assistant Director and Curator of Decorative Arts at the Munson-Williams-Proctor Institute, will discuss the phenomenal popularity of innovative and expressive brass and mixed-metal furniture and accessories that became ubiquitous in fashionable 1880s American interiors. This illustrated lecture will present original research on the inventive and artistic applications of industrial metals in the
form of what was called “art brass” or “artistic bronze goods.” The terms, coined by manufacturers and retailers, refer to visually and materially complex metal furniture and accessories made in response to consumer demand for decorative arts in the Aesthetic taste. The furniture design is a mixture of Anglo-Japanesque and Modern Gothic forms with Japanesque surface finish and exotic ornamental flourishes drawn from Asian, Moorish, and Persian cultures. Many of the pioneering manufacturers of the materials, such as R. Hollings & Co. (Boston), The Charles Parker Co. and Bradley & Hubbard Manufacturing Co. (Meriden, CT) and P. E. Guerin and W. T. Mersereau (New York, NY), and will be discussed, showing the range and diversity of their products and how they were used in the Victorian home.

Thursday, November 18th, 6:00pm
In the Midst of Beautiful Surroundings: The Samuel M. Nickerson House
David Bagnall, Director of the Richard H. Driehaus Museum, Chicago, Illinois
In 1879, Chicago banker Samuel Mayo Nickerson commissioned a new house from the architectural firm of Burling and Whitehouse of Chicago. Completed in 1883, Nickerson’s Marble Palace was described by the Inland Architect of February 1883, as having “reached a standard of excellence never before attained in Chicago.” The eclectic ornamentation found throughout the home is exemplary of prevailing tastes in American interiors of the 1880s. In design of the “house beautiful” decorators employed a panoply of styles, including Egyptian, Pompeian, Chinese, Japanese, Moorish, and Renaissance Revival to name but a few.

Driehaus Museum Director, David Bagnall, will discuss the history of the Nickerson House and the philosophies in late-nineteenth century architecture, art and design that governed its creation.

All discussions in the Samuel M. Nickerson Lecture Program start promptly at 6 p.m. on
select Thursdays throughout the year. Museum doors open at 5 p.m. for any attendees who would like to take a self-guided tour of the Museum’s main floor prior to each lecture. Since space is limited, reservations to attend any and/or all of the lectures are required. To make reservations, guests may call 312.482.8933, x21 or e-mail info@driehausmuseum.org.

About the Driehaus Museum
The Driehaus Museum preserves and interprets the Gilded Age home of Chicago entrepreneur
Samuel Mayo Nickerson in order to promote the understanding and appreciation of historic
architecture and design. Designated as a Chicago Landmark in 1977, the Driehaus Museum is located at 40 East Erie Street in downtown Chicago and is open to the public for guided tours on a firstcome, first-served basis, Tuesdays, Wednesdays and Saturdays, excluding some holidays, at the hours of 10 a.m., 1 p.m. and 3 p.m. The docent-led tours run approximately an hour.

Private group tours can also be arranged on Thursdays and Fridays.

About Harris Bank
Harris is an integrated financial service organization providing more than 1.2 million personal,
business and corporate clients with banking, lending, investing and wealth management solutions. The organization is a member of the BMO Financial Group (NYSE, TSX: BMO), which also provides corporate and investment banking services in the U.S. under the BMO Capital Markets name.

About Sotheby’s
Sotheby’s is a global company that engages in art auction, private sales and art-related financing
activities. The Company operates in 40 countries, with principal salesrooms located in New York, London, Hong Kong and Paris. The Company also regularly conducts auctions in six other
salesrooms around the world. Sotheby’s is listed on the New York Stock Exchange under the symbol BID.

Posted by Society of Architectural Historians Chicago at 7:05 PM No comments:

THIS JUST IN FROM SAHCC BOARD MEMBER SALLY KALMBACH:

We need ticket takers and escorted service to the sites for the following tours that depart from Holiday Inn Mart Plaza. (VOLUNTEERS MUST arrive at the Holiday Inn at least 10 minutes ahead of time)

CITY HALL GREEN ROOF TOUR, Thursday APRIL 22nd, Friday, APRIL 23rd Noon until 1:30 p.m. Arrive at Holiday Inn at least 10 minutes ahead of time to take tickets.Take the participants to City Hall and staff person will lead them to the roof. 1) Thursday 2) Friday

I thank you in advance!!