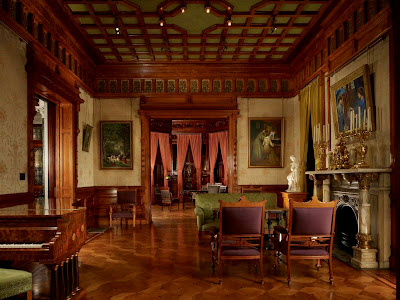 To mark the commencement of the Program, a light reception will follow the first discussion on Tuesday, March 15, 2011. The full year roster of topics and speakers consists of:

Tuesday March 15th, 6 p.m.
Triumvirate: McKim, Mead & White: Art, Architecture, Scandal, and Class in America’s Gilded Age
Mosette Broderick, Architectural Historian
As America matured in the mid-19th century, the architectural firm of McKim, Mead & White provided buildings for a changing society. From wooden houses at the seaside to regal social clubs in the city, as America transformed itself, these architects helped to refine the nation's idea of power and beauty. When McKim, Mead & White focused on the World's Columbian Exhibition, they came to see architecture as able to transform a nation. Mosette Broderick is an architectural historian. She is currently director of the Urban Design and Architecture Studies Program as well as the London-based Master of Arts program on Historical and Sustainable Architecture in the Department of Art History at New York University.

Arabella Yarrington “Worsham” Huntington, a poor refugee of the post bellum war-torn South, demonstrated an independent aesthetic sensibility when she initiated in 1877 the remodeling and decorating of an Italianate mansion on West 54th Street in New York City. Combining current trends in Aestheticism with a subtle Francophile taste, she supervised the construction of the Worsham-Rockefeller bedroom. Recent research reveals that the project itself underwent mid-course changes, suggesting not only a patron’s evolving preferences, but broader developments in interior design. This talk will consider the Worsham-Rockefeller bedroom within the context of Arabella’s own life and the larger social and cultural milieu of America’s Gilded Age.

Thursday May 26th, 6 p.m.
Aestheticism and the American Businessman
Melody Barnett Deusner, Terra Foundation Fellow in American Art, Northwestern University
In turn-of-the-century America, paintings associated with the Aesthetic Movement were promoted through the collecting practices of a network of businessmen/art patrons who knew each other, exhibited and traveled together, and donated foundational collections to national museums. Although it may seem strange that soft, ethereal canvases painted by James McNeill Whistler, Thomas Wilmer Dewing, and Dwight Tryon appealed to Gilded Age industrialists, merchants, and bankers, contemporary publications frequently used the same language to describe successful Aesthetic artists and effective businessmen: both valued a selective and logical mind, a quick eye, and a decisive character. Installed in harmonious, fully coordinated interiors, Aesthetic paintings became much more than mere status symbols, serving as tangible tokens of friendships and business partnerships, while simultaneously evoking a networked world controlled by and shaped around the patrons themselves.

Thursday September 29th, 6 p.m.
Millionaires and Military Men: Aesthetic Movement Interiors at the Seventh Regiment Armory
Chelsea Bruner, Doctoral Candidate, City University of New York
Completed in 1881, Manhattan’s Seventh Regiment Armory is now recognized as one of the most important surviving collections of late 19th-century, high-style interiors. The structure was a privately-funded, purpose-built headquarters for the country’s most elite volunteer militia and served a variety of functions for the prestigious group. In back, a 55,000-square-foot drill hall accommodated military maneuvers, munitions storage, and occasionally social gatherings. In the front administrative wing, regimental and company rooms were designed by the most sought-after decorating firms of the period, including Herter Brothers and Pottier & Stymus. The Veteran’s Room and Library—widely considered the Armory’s most remarkable spaces—were an early collaborative effort between the recently-formed Louis C. Tiffany & Co., Associated Artists, and the young architect Stanford White. Chelsea Bruner is a Ph.D. candidate at the CUNY Graduate Center in New York City. She teaches architectural and design history.

Thursday October 27th, 6 p.m.
The Isaac Bell House: Masterpiece of the Shingle Style
John R. Tschirch, Director of Museum Affairs/Architectural Historian, the
Preservation Society of Newport County, Rhode Island
This illustrated lecture will examine the creation of the Isaac Bell House (1883) in Newport, R.I., by the legendary architectural firm of McKim, Mead & White. A landmark of the Shingle Style, the Bell House is part of a small group of innovative summer houses designed in the fashionable resort of Newport in the early 1880s. The open plan and fusion of Colonial, European and Asian design motifs in the Isaac Bell House made it a seminal work when it first appeared, laying the groundwork for later developments in modernism by Frank Lloyd Wright and others.

All discussions in the Samuel M. Nickerson Lecture Program start promptly at 6 p.m. Museum doors open at 5 p.m. for any attendees who would like to explore the Museum and its collections. Since space is limited, reservations are required. To make reservations, guests may call 312.482.8933 x21, or e-mail info@driehausmuseum.org. More information also may be found on the Museum’s website, driehausmuseum.org.
Posted by Society of Architectural Historians Chicago at 7:49 AM No comments: